Probably most important when discussing Kobe Bryant was his ability to snatch a victory away from the opponent. And it’s what made him unique from any other player in his era. 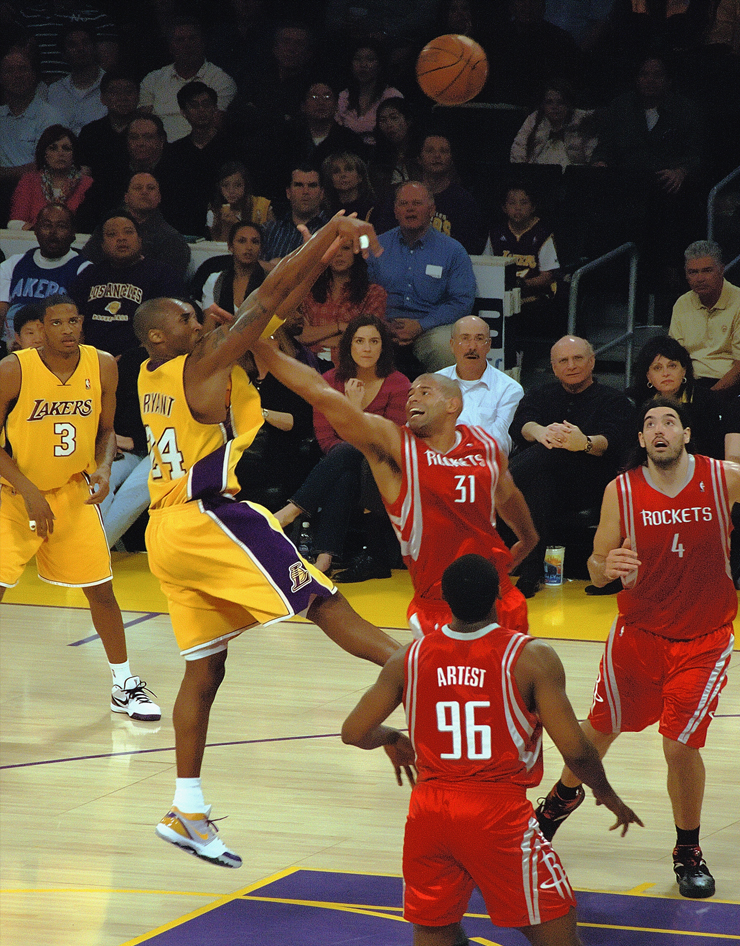 This is part 2 of my 5 part series, covering Kobe’s greatest buzzer beater in each jersey. If you missed Part 1: Greatest Dunk last week, click here to read it. Be sure to follow me on Twitter @cleanupglass, so I can update you on my next post, and give you my quick takes throughout the NBA season.

Kobe has accumulated a library of buzzer beaters, game winners, and lead changing shots over the course of his career. Even early in his career, wearing #8, it seems like when the lights were brightest, Kobe shined brighter. Ask the Suns, when Kobe hit the Game 2 game winner over Jason Kidd, to put the Lakers up 2-0 in the 2000 Western Conference Semi-finals. Or, even better, you could ask the Blazers, when Kobe hit not one, but two ridiculous 3-pointers to give the Lakers a regular season win, and the 2004 Pacific Division Championship. Two shots in one regular season game, what could be more clutch than that?

I have to go with the buzzer beater in Game 4 of the 2006 NBA Playoffs (again. How many times am I going to keep bringing us back to this year? Just a couple more times…). This one stands out easily because Kobe had to come to the Lakers rescue not once, but twice, in a series nobody expected the Lakers to win (until, of course, the Lakers took a 3-1 lead). And the game itself seemed practically over, more so even than the regular season game at Portland.

The Suns had possession with 7.9 seconds to go in the game, and a two point lead. For the Lakers to eek out a win, they had to hope that, following a quick foul, one of the Suns players would miss a free throw, so that they could tie it with a 3-pointer, and send the game to overtime. At least, that was every Laker fans hope at the time, because the Phoenix Suns just happened to be the best foul-shooting team in the league. Shooting 80.6% from the stripe, all positions from 1 through 5 could be depended on to sink a couple free throws with the game on the line. Especially Steve Nash, who led the league shooting freebies at a ridiculous 92.1% (it was only his career high). So, really, all the Suns had to do was get the ball into Nash’s hands, and they would be up 4, headed back to Phoenix with the series tied, and the Lakers seemingly doomed.

Even the broadcasters knew as much, with Mike Breen saying “They’ll try to get the ball into Nash’s hands…” And when Nash gets his fingertips on the basketball, they both sink a little, knowing the game is over, with Breen letting his excitement wind down and saying, “… and they do” Hubie Brown would follow with a deflated, “They do…”

But Nash wouldn’t be fouled, and the Suns wouldn’t breathe a sigh of relief as he would go through his free throw routines. Smush Parker would poke the ball free from Nash’s hands, with Kobe ending the ensuing Laker fastbreak with a high arcing floater, to send the game to overtime. This shot was unlikely enough, and, as a Lakers fan, I was just happy with the Lakers having an extra five more minutes to win the game. I wasn’t expecting Nash to giftwrap another costly turnover late in the game when the Lakers would really need it. But this is exactly what he did.

In the overtime, again, the Suns would have the lead 98-97 with a little over 11 seconds to play in the period. And again, Steve Nash would have the ball in his hands. This time, Nash would have to be fouled, and this time, he would drill the two free throws to put the Suns up 3. Or so we would think. Nash would almost run into Lakers forward Lamar Odom, who stepped out past the 3-point line to meet Nash early, but surprisingly wouldn’t foul him. Nash would turn from Odom and hold the ball away from his body, in an effort to regain some of his balance. It would help, but in doing so, the ball would be placed right into the hands of nearby Laker defender Luke Walton, who came over to help Lamar on the trap.

The defense worked beautifully, causing Luke to wrestle with Nash for the ball, and force a jumpball at center court. Luke standing at 6’8” to Nash’s 6’3” (and lack of supreme athleticism), was expected to win the tip, and he did, wisely tipping the ball to the real MVP, Kobe Bryant. Unlike Nash, Kobe wouldn’t lose the ball with the game on the line and his team down (think about that for a second: Nash could have relaxed with the lead. Kobe was the one who should’ve been panicking). On the contrary, Kobe would make each second he had with the ball count.

With 6.1 seconds to play, Kobe gathers the ball a little past midcourt, and brings it to the arc.

Raja Bell, the Suns two guard, and next in a long line of failed “Kobe-stoppers”, shadows him. Kobe shortens his dribble as he finds his way to his favorite spot on the court, the high post.

Bryant raises up, meeting Bell and now Suns forward Boris Diaw in mid-air who both challenge the shot, and releases.

The ball floats in a perfect arc towards the goal as a sold out Staples Center watches in silence.

“Bang!” exclaims Mike Breen. The crowd erupts, Kobe is mobbed by his teammates, and the Suns can only watch in stunned disbelief at what had just happened to them. Not once, but twice.

I wrote in this mention of Kobe’s buzzer beater how Kobe was the real MVP of the 2006 NBA season. And anyone can bring up how the Lakers lost holding a 3-1 series lead, or how Kobe hung his team out to dry in a Game 7 when the Suns seemingly started the game with a 20 point spread. But this Game 4 is always my argument for his MVP award robbery. Yes, Nash could’ve won the game, as I’m sure Phoenix fans are all supremely confident that had he been fouled and actually got to the line, he would’ve drilled both free throws in either situation.

But Laker fans were even more confident. Because they knew all their team had to do was get their guy the ball, and their team’s MVP would do the rest.

Interestingly enough, there are not a lot of buzzer beaters in Kobe’s library during big games in this chapter of his career. He had a few chances, such as Game 2 of the 2009 NBA Finals, to end the game in regulation against the Orlando Magic. But he would miss this one, and the Lakers would have to earn the win in overtime. He drilled a dagger turnaround jumper in Phoenix during the 2010 Western Conference Finals, but it wasn’t to beat a buzzer, or even win the game. A dagger is just that, a dagger to the still beating heart of your victim. Vicious, yes, but not a buzzer beater, which is what I’m looking for. The first one that jumps to my mind is Kobe’s Prayer against the Miami Heat during the 2009-10 regular season.

What makes a buzzer beater better, in my opinion, is when the team taking the shot is currently losing. There are a lot of buzzer beaters that happen in the NBA, but many occur while the game is tied. And while it’s nice to watch a player sink a shot to win the game, if it’s tied and he misses, the game only goes to overtime. Nobody is going to micro-analyze the play in hindsight, to then write the next day what the player should have done instead. And we won’t all be watching as fans the next time the player is put in that situation, saying, “Well, last time this bozo took the shot, we lost the game. I bet he blows it again.” So, it takes a much greater player to sink these types of shots, because he is either prepared to live with the consequences, or believes there is no way in hell he is going to miss it.

Kobe has a history of making these types of shots, and in much bigger games. What I particularly like about this buzzer beater though, is even Kobe is surprised when it goes in. And not because he doesn’t expect to make shots like this (the way Lebron freaked out back in 2009 hitting his game winner to beat the Magic in the playoffs), but because Kobe was a creature of habit, and that his work ethic was second to none. We all know he practiced meticulously, so that every time he raised up for a jumper, no matter how fast he was running, or which direction he was going, or if he was turning around or fading away, his feet were always planted, his shoulders were always square, and his eyes could always find the rim.

This shot, on the other hand, is all messed up. Kobe lifts off on one foot, which is something only Dirk Nowtizki has been able to get down to a science. His shoulders are not square, because he’s running at an angle to escape the defense, so it’s basically a runner from the 3-point line. And as you’re watching it, it’s way too long. The only way it was going in is if it was a bankshot, and Kobe was not Tim Duncan. And he had to shoot it this way, because the shot was contested perfectly by Heat guard Dwyane Wade, meeting him at the peak of his jump to challenge. This shot is not at all like the shot I described earlier in his #8 jersey, where everyone except perhaps Kobe’s harshest critics knew that ball was going in. This one looks like it’s off from the moment he gathers himself to take it.

After 13 seasons of watching Kobe sink these high pressure shots, some of the thrill we should’ve felt as fans when he made them had dissipated. As fans, we started to expect him to take and make these big shots. Kobe was calm in these moments, and now so were his fans. since we were all so confident in the result. And I think that’s the reason why this shot sticks out among the others: Because it was one of the few that Laker fans would not have been surprised had he missed.

Tune in next week, for Part 3 of my 5 part series: Kobe’s Worst Moment.