We all had our expectations of how this experiment was going to shake out, but did anyone correctly predict the result? 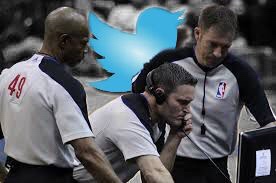 We all thought it was a joke. Even I had my reservations about it when I heard the news.

But the NBA did the unthinkable. Following heavy criticism after the first two games of this year’s Finals, the league responded by having @OfficialNBARefs, the Twitter handle representing professional basketball’s referees, live tweeting during Game 3 last night. With the internet, who is always both crazy and angry about everything.

It sounded like a terrible idea from the word “go”. The first two games were so bad that, forget the internet, hoop heads everywhere would have ripped the refs a new one in-person. Upon hearing of the news, my mind jumped to some of the terrible calls from the previous games, and how the referees’ Twitter would handle rabid, spiteful fans demanding explanations for some of the worst officiating we have ever seen (or at least in recent memory). How could the referees Twitter attempting to explain away a call that pissed off the entire internet help anything?

The second thought my mind wandered to was, Really? Really NBA? The entire pro hoops watching audience is screaming for change within your ranks of officials, and you respond by having some poor dink man the controls of the referees’ Twitter account? This dude is supposed to single-handedly put out the fires that your league’s officials are creating? I already had my Commissioner hat on, typing away at my newest post, expecting this to end horribly, and present basketball fans with the change I would have liked to see from the league. Real, previously unheard of change, that would shake my readers to their very core (maybe).

Fast forward to Game 3 of the 2018 NBA Finals. There were a few shitty calls here and there, sure. Even Jeff Van Gundy chimed in early in the first half following a blown call, exclaiming (Paraphrasing here, sorry. Couldn’t find the exact clip), “I’m not on Twitter, but I wish I was for the NBA referees’ live tweets tonight!” But, by and large, this was the first game to end this series without the national media or the Twitter-verse spewing venom about the league’s officials. It ended as it should, with both teams in an exciting back-and-forth battle, and LeBron dueling it out with KD to end the game. It was refreshing to actually watch the players decide the game for once in this series.

Then, it occurred to me: Did Commissioner Silver’s plan work? Was it any coincidence that the best game of the series so far happened on the night NBA referees Twitter was live and open for ridicule? I have since deleted most of the post I started working on yesterday, electing to instead judge Silver’s plan to see if it met the criteria I was demanding for change.

Surfing replies on Twitter from what most fans wanted to see, a few of them clamored for the NBA to make their referees available for post-game interviews. I personally don’t need this. These asshats get too much face time as it is. I really shouldn’t know any of their names, and each time I do inevitably learn a new one, I sprout a new gray hair and lose a memory from my childhood. But the foundation of this idea is paramount: Hold the referees to the same accountability that we do the players. These clowns want to be as well-known as the players (I’m surprised the NBA store doesn’t have a Joey Crawford or Dick Bavetta jersey for sale), then put them up in front of the media and answer questions like LeBron does about how they screwed up the entire outcome of the game, and how they will try to do better next time.

What the NBA chose to do instead was hold an open dialogue with their fans, which is even scarier than any interviewer you could ever dream of. This is because the internet allows even the meekest of individuals to behave like savages. Now, the referees are not fielding questions from Brian Windhorst or Rachel Nichols softballing “What was going through your mind during that last play?”. They’re hearing from Trollie McPervert and all of his followers about how “That last call was a FUCKING disgrace!” and “You ass lickers are all ruining the sport of basketball!”, in real time!

That’s when I started to think about the bigger picture for this reaction from the NBA. It wasn’t for us as fans to have someone deem all of our anger unwarranted. Some of the things being tweeted by the account were not even helpful. It was a threat from the league to it’s referees that we will all be watching. Think about that for a second. How scary must it have been for the referee crew working that night to know their employer had someone on-hand and available to the brainless and vulgar internet masses, in case one of them screwed up royally and became the talk of the town after Game 3? Perhaps this was encouragement enough for the refs to stop dropping the ball, a creeping feeling of uncertainty about the NBA’s positive treatment of them, and if it would continue. Because the stance the league took last night was in stark contrast to actions taken previously, when the NBA would coddle them, protect them, and, even if something went horribly wrong, simply issue a statement saying, “Our bad”.

The refs were indeed being held accountable for Game 3.

Isn’t this what we all want when we watch a basketball game? We all want to see a great game, with the better team wining the contest. We don’t want to walk away from a game screaming, “I can’t believe they made that call towards the end!”, or, “Well, the other team would have won if the refs hadn’t put their star player in foul trouble to start the third quarter!”. Much too often these playoffs, we have all left scratching our heads and wondering aloud just what the referees were thinking. Does the NBA have a hidden agenda? Are their games rigged with a predetermined outcome already in mind? All of the conspiracy theorists were back with plenty of new ammo thanks to the officiating this post-season.

And it was because the officials were not allowing the game to breathe. They were so caught up in making calls that they thought they saw, make-up calls, and inexplicably swallowing the whistles entirely, disrupting the tone of the game, that at times, the players on the floor seemed to only be along for the ride. Last night was different though, and I think it was because they knew the world was suddenly watching them under a microscope. If they called something they “thought” they saw, the internet would erupt. If they then chose to right that wrong with a make-up call, it would prove to the masses that they were correct in their earlier assumption, and conflict with what the referee Twitter account would have defended. Instead, Game 3 flowed very nicely, particularly in the fourth quarter and deciding minutes of the game. It allowed Kevin Durant’s 43 point performance, including a “Deja Vu Dagger” three to ice the game, to be what ultimately decided the outcome of Game 3.

So, this criteria was also met.

Will this trend continue? Will the NBA make #RefWatchParty a permanent fixture? I’m not sure, although I sincerely hope they consider it. Because not only was it a joy to watch, but it felt even better to wake up the next day and hear everyone talking about the game for once, and not the officials.

And that’s the way it should be.

Follow me on Twitter, for more of my newly acquired (and likely short-lived) referee pandering. I actually have a very negative social media presence regarding the NBA and it’s officials, frequently hashtagging #BadRefs. That’s probably why I found it necessary to speak highly about them for once, because I truly felt the job they did was night and day from what we’ve all grown accustomed to. A pat on the back to Commissioner Silver as well, for his outside the box thinking, and for quickly recognizing this was a growing issue that needed addressing. You survived another season as Commissioner, Mr. Silver. Congratulations.

One thought on “Did #RefWatchParty Actually Work?”