The greatest duo in basketball history were simply playing a better, smarter game against their opponents

I recently entertained an alternate dimension in which Michael Jordan never existed. I came to the conclusion that Karl Malone’s legacy was tossed aside because he never won a championship, even though it was one of the greatest players who ever lived that was standing in his way:

I ended the post stating – quite matter-of-factly – that Malone’s Utah Jazz would have no problem securing the 1997 and 1998 NBA championships from whomever emerged as Eastern Conference champion each season.

And this decision was easy for me to make because Malone also had John Stockton as a teammate, and because they both shared these three special traits:

Although Malone’s greatness is well documented in my post, I somehow managed to make no mention of Stockton, or his exploits. Stockton’s career average of 13.1 points per game is hardly of mention, but what does warrant mentioning is that he also holds a career average of 10.5 assists and 2.2 steals. There are only fifteen other players who have ever averaged those numbers in a season, but Stockton has somehow managed to average these numbers after a nineteen year career.

What does a nineteen year career of 10.5 assists and 2.2 steals get you? It makes you the all-time leader in both categories, and it’s not even close:

Stockton has 3,265 career steals, 581 more than second place. Of active players looking to dethrone him, Chris Paul is closest with 2,122 career steals. If Paul were to continue his career average of two steals per game and play all 82 regular season games, it would take him another seven seasons to pass Stockton.

Stockton also has 15,806 assists, 3,715 more than second place. Of active players looking to dethrone him, again, Paul is closest, with 9,181 career assists. If Paul were to continue his average of close to ten assists per game and play all 82 regular season games, it would take him another eight seasons to pass Stockton.

In other words, his records aren’t going to be broken anytime soon.

How did he do it?

Stockton played hard-nosed defense. With the way today’s game is being played, I’m guessing his all-time steals record will stand for a while.

Having said that, the record I’m quite certain will never come down is assists.

I was once asked, which record of Stockton’s seems to be the most impossible to break? I answered that, although the career steals total seems so astronomical, a player one day dedicating his entire career to defense – and an NBA that actually encourages hard-nosed defense to be played – doesn’t seem impossible, at least in my eyes.

What most don’t realize when they look back at Jordan’s primary competition from the Western Conferece was the close bond that they shared as long time teammates.

Count myself as fooled, even at a time when I was watching the games as they were happening.

In 1997, I was a teenager, and just beginning to carve out my love for the game of basketball. I loved watching Nick Van Exel dribble between his legs, leading the Lakers on the fast break and tossing no-look passes to Cedric Ceballos, Eddie Jones, or a young Kobe Bryant for the emphatic finish. Long shorts, flashy moves, Shaquille O’Neal dunks and alley-oops, how could my Lakers ever lose?

Especially to the Utah freaking Jazz.

“Look at John Stockton,” I would think to myself.

“… With his shorts hiked all the way up his ass. Nobody wears their shorts like that anymore, old man! And Karl Malone could never catch an alley-oop, he plays basketball like a dinosaur!”

But when my Los Angeles Lakers did meet the Utah Jazz in the playoffs – in both the 1997 Western semi-Finals and the 1998 Western Conference Finals – their quests for NBA gold were promptly thwarted. In five games and four games, respectively.

So, what the hell happened?

Four years ago, Reddit user darinhq created a graph using good ol’ Basketball Reference that illustrated which two teammates played the most games together in NBA history. His results? 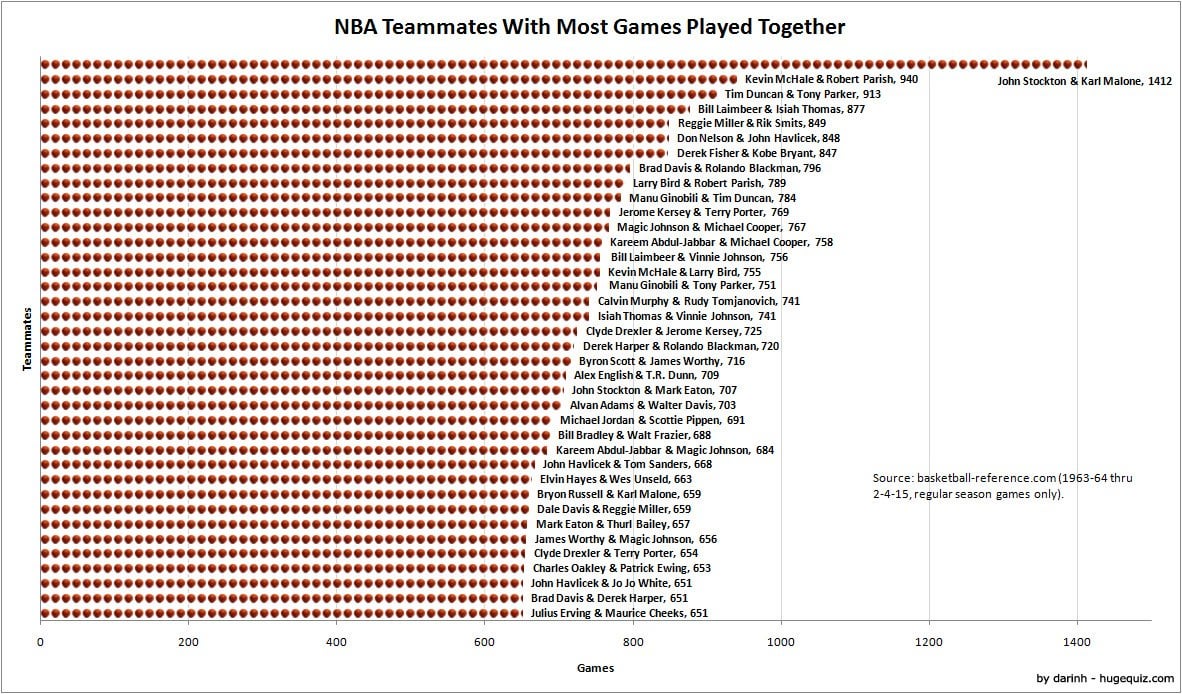 Stockton and Malone topped the list by a mile, edging out the pair with the second most games played by 472 games (or, almost another six full seasons).

What’s the significance of this?

Think about someone you really care about. How long have you known this person? Ten years? Maybe more?

It’s really none of your business. Make your point, quickly now…

Well, my point is, you probably know this person inside and out. The two of you can probably finish each other’s sentences, or share a conversation without saying a single word. You are both on the same wave-length, because you both have put in the time necessary to allow your relationship to grow and establish such a deep connection.

Malone and Stockton played together for eighteen seasons, or nearly the entirety of their careers (Stockton has one season without Malone because Malone was drafted a year after he was, and Malone has one season without Stockton because he failed in shamelessly chasing a ring). Leading up to their 1997 NBA Finals run, that was already twelve seasons.

To put that into perspective, Marc Gasol and Mike Conley were formerly the longest tenured teammates of active NBA players. Before being traded last season, they had played together for eleven seasons. Now that they play on different teams, you could probably point to Steph Curry and Klay Thompson, who have played eight seasons together. My point is that kind of continuity simply doesn’t exist anymore.

That’s why it’s no coincidence to me that before the start of the 1996-97 NBA season – the first season that the Utah Jazz would reach the NBA Finals, and that Karl Malone would be named league MVP – Stockton and Malone had already played a total 995 games (including playoffs) together.

And that’s what made this simple play so deadly…

The pick and roll is as basic a basketball play as there is: A player simply stands in the way of his teammate’s defender, and travels freely towards the basket. This can happen because when the primary defender hits the pick, the defense is forced to switch to cover the ball handler. And with the primary defender knocked to the floor, a game of two-on-two quickly becomes two-on-one.

The video below displays some of the ways NBA defenses tried to defend this simple but effective play:

Alright, so how the hell do you defend the pick and roll?

In watching the above video, there were a few times where Stockton and Malone would run the pick and roll, pause, then run it again to get a bucket (ex. 1:47). They would do this because the defense could only react to what the two Hall of Famers were doing. So, if the play was run a second time, the defense would be forced to repeat their strategy, in an effort to simply be on the same page and avoid any chance of miscommunication.

A good strategy could probably confuse most players attempting to run the play; However, once Stockton and Malone saw how the defense was reacting, they would alter their attack, and the defense was doomed.

Think about the countless times the two must have run that play. Wait, stop, because I know you’re only thinking about the actual NBA games they played. Now consider that they would have honed the same play, over and over again, in countless practices. Possibly setting up their teammates in different scenarios and strategies, understanding what works and what doesn’t, against every defense imaginable. The end of the video is right on the money: They had seen it all, and they had a counter for everything you threw at them.

Because Karl Malone and John Stockton were so talented, complimented themselves perfectly, and had played so long together that they were practically symbiotic, it should have been unfair for the rest of the NBA that two Hall of Fame players had the entirety of their careers to perfect a single play in basketball. This is why the pick and roll was their weapon of choice, and why it was so deadly to the opposition, making them both criminally underrated.

It’s OK. Teenage Dan – with his baggy shorts and Lakers highlights – is right there with you.

All stats were found, as always, on www.basketball-reference.com.

If you enjoyed this post, make sure you click the Like button, drop a comment because I’d love to hear from you, and follow me on Twitter, where I swear I won’t call anyone who played in the ’90’s a “plumber”. And you’ll want to follow me, because you already know that NBA Twitter is a clusterfuck. There really are dumbasses out there who believe Stockton and Malone shared a locker room with John Havlicek. Really. Do yourself a favor and click the link. It’s a visual marvel of dipshittery.

So, if you’ve somehow stumbled upon my blog, congratulations! It’s a jungle out there, but among the swarms of mosquitoes and cannibals eating each other, you’ve managed to find a basketball oasis.